This Couple Threw a Divorce Party; Find Out Why 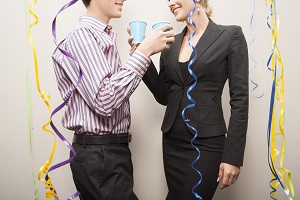 In a previous entry, we shared news about the growing trend of divorced couples eliminating the misery often associated with divorce. In a move that generated headlines across the country, a Berkeley couple threw a divorce party that was attended by family and friends alike.

Michelle Mahoney and Jeff Becerra had been married for just over 20 years, and have two grown daughters. In a plan to lessen “a little bit of the awkwardness,” the two planned the party to make it clear to everyone that they were fine with the decision to divorce and have every intention of remaining friends.

“We’re not celebrating the fact that we got divorced, we’re celebrating the way in which we did it…keeping the friendship that we have and keeping as much of a family group as we can have together,” said Jeff during an appearance on ABC’s Good Morning America.

When They Realized Divorce Was Best Option

During the same interview with Good Morning America, Michelle said, “We just did a lot of self-examination and realized that we had fallen out of love.”

Who Gets What; Reaction of the Children

Although one of the couple’s daughters was unable to make it to the party, their 18-year-old did attend. She even posted photos of the divorce party to her Twitter account, where they quickly netted over 160,00 likes and more than 50,000 re-tweets.

“I didn’t feel sad at all,” the daughter said. “I just thought it was fun. People who know (my parents) understand that this is something they would totally do.”

As for how the couple’s assets will be divided, Jeff said, “We figured out that we didn’t care about the stuff.”

“It’s just things,” added Michelle. “Our daughters are the most important things to us.”

There’s an abundance of research showing that children of divorced parents experience a better life when they have attention and love from both parents. The children will have a much better chance to thrive in life when both parents are seen as team players and are involved in their lives.

Are You A Man Facing Divorce? Call The Men’s Legal Center in San Diego

We’re all for people being able to make things easier on themselves during difficult life changes like divorce. We are also very much aware that divorce is a serious step, and one that should be taken only after serious and thoughtful consideration.

If you’re considering divorce or have been served with divorce papers, you need the expert advice and help of the attorneys at Men’s Legal Center in San Diego.