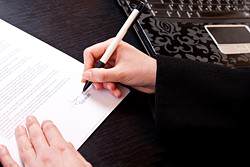 When parents of a child separate from each other and each of them wants primary custody of that child, the resulting battle can be extremely nasty and antagonistic.  During a time like this, people tend to see their worst come out and act in a way that they would not be proud of.  Unfortunately, that’s what one man in Pennsylvania is accused of doing with regards to a contested child custody case that led to his arrest on suspicion of several criminal charges.

Specifically, the case concerned a man and his girlfriend who had a child together.  When they broke up, they worked out a child custody agreement that was approved by the local court.  However, the man later allegedly set up a fake email account in the name of his ex-girlfriend and sent himself a threatening message.  He used that message in an attempt to dismiss the court-approved custody agreement.  However, the ex-girlfriend claimed that she did not send that message, and police investigated the matter.

As a result of the investigation, police found that the email was actually sent from an IP address at the man’s place of employment.  Therefore, he was arrested on suspicion of several charges that included identity theft, obstruction of justice and unlawful use of a computer.  These are considered felonies in Pennsylvania and the man could face prison time if he is convicted.

As stated above, nasty child custody battles tend to bring out the worst in people.  However, during this time it is of paramount importance to avoid conduct that could come back to harm a father’s case overall.  That’s one of the many reasons that a father in this position needs to obtain the help of an experienced professional to help him through this difficult process.

If you are facing the possibility of having to fight for the custody of your children, you need to seek the help of San Diego child custody lawyers who have been standing up for the rights of fathers for many years.  Contact the Men’s Legal Center today to schedule an initial consultation.