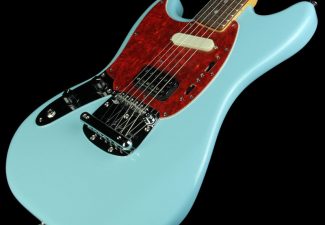 For fans of grunge heroes Nirvana, the acoustic-electric guitar played by frontman Kurt Cobain during the band’s epic “MTV Unplugged” performance is akin to the Holy Grail of rock.

That same guitar is now at the center of an increasingly nasty divorce between the late singer’s daughter, Frances Bean Cobain, and her estranged husband, Isaiah Silva.

When she originally filed for divorce in late March, Frances explicitly noted in the filing that Isaiah had no legal right to one bit of the inheritance that she was given as part of her late husband’s estate, which is rumored to be about $450 million.

However, Isaiah wants to keep the now legendary guitar, which purportedly was the last guitar played by Cobain before his suicide. He maintains that the guitar was given to him by Frances as a wedding gift.

The guitar is one of only 300 Martin D-18E models ever made. It was insured for $1 million but is believed to be worth much more than that because of sentimental value.

Courtney Love, Frances’s mother, says that she gave the guitar to her daughter.

In her divorce filing, Frances insists that all premarital assets – including the inheritance – be awarded to her as separate property.

Common examples of separate property include:

Have Questions About Marital Property Division? Get in Touch With The Men’s Legal Center

Division of the marital estate is one of the most central requirements that must be satisfied before a marriage can be legally dissolved.

If you’re facing divorce, make sure your rights are protected by getting in touch with us here at The Men’s Legal Center. Our phone number is 619-234-3838 or you reach us via email.