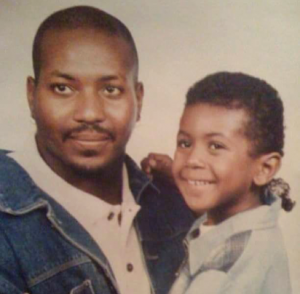 Patrick and Marquis, at or around 4 years old.

Patrick L. Turner is a longtime resident of San Diego, California. He was born in Fort Worth, Texas, and moved to California when he was a young boy. Patrick attended and graduated from Morse High School. He then attended San Diego City College, where he played football and studied Business Management. Patrick began working for the City of San Diego in 1994, recently celebrating his 20th anniversary as a dedicated City employee. Patrick is the youngest of nine children, who were raised by a single mother. Patrick knows the struggles of being a parent with primary responsibilities.

Patrick raised both his son, Marquis Turner and his nephew Bryan Russell. Patrick was very involved in both the boy’s young lives, and kept them active in local youth sports. During the time they played youth football, Patrick took on the role of coach for their football teams.
Patrick’s son Marquis was 7 years old when Patrick took on primary custodial parenting responsibilities. The reason was to allow Marquis’ mother to finish her college degree. This was an act of selflessness. In addition to raising his own son, Patrick had taken on the responsibilities of his nephew Brian when his mother, Patrick’s sister took ill. From that point on Patrick was basically raising 2 boys and it worked out! Patrick guided both boys until they graduated high school.

Patrick knows the importance of a father. He was raised without a father in the home and was raised by a single mother. Growing up in Southeast San Diego and not having a father made it much more important to be there for his son Marquis. He wanted to make sure young Marquis always had a positive image of his dad in his life.

MLC: What does effective co-parenting look like from your experience?
PT: Putting selfishness aside. 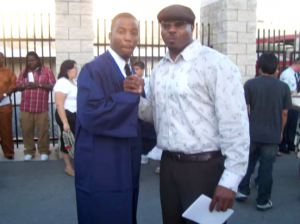 Marquis and Patrick on Graduation Day

What was a proud moment in raising Marquis?

PT: A very proud moment in raising Marquis was watching him develop so much compassion for others. He learned how to be selfless when dealing with life in general–all without complaining.

Patrick’s act of selflessness in allowing and encouraging Marquis’ mother to grow for the betterment of their child really stood out to Marquis. This helped him in sharing his father with not only his cousin but the community as well.

MLC: How did you stay involved when the relationship ended with Marquis’ mother?

PT: Even though things didn’t work out with Tracy and I, we agreed that as parents Marquis would be secure in both homes no matter what we were going through individually. That takes maturity for both parents. Tracy allowed me to be the father I needed to be to Marquis. 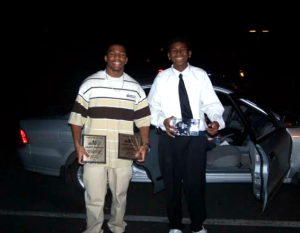 MLC: What advice could you give to others working through co-raising children in two homes?

PT: To our young dad’s I would say do your best to be available, regardless of your court ordered time. No matter the obstacles between the other parent and yourself make an effort. Be there for the parent teacher conferences, school open houses, extracurricular activities, and life milestones. Don’t wait around on a court order to tell you when to be involved.

MLC: What are your thoughts on emotional development while raising kids?

PT: Provoke thoughts for growth. Ask children their goals and ambitions in life to foster their growth emotionally and intellectually.

“Most young fathers from our neighborhoods think child support is about money. It’s more than that. Be there more than just supporting the child financially.”

Patrick stayed involved. He coached sports, attended school events, and community work along side the children’s activities.As a single dad Patrick took on learning to cook to keep the boys healthy with their busy schedules and also to save money.

What does the future look like for Marquis and Patrick? 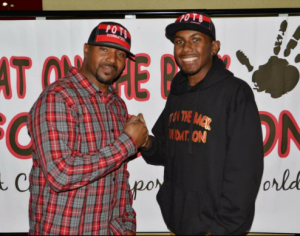 Patrick has built a business called “PT Print Productions” to pass down to Marquis and build on when Marquis decides to take the challenge on full time. Educationally, Marquis is on his way to study at Mount San Antonio for Aviation Science. He wants to become an Air traffic controller.
Marquis aspires to work in the air aviation profession.

Patrick and Marquis are even more inseparable now that Marquis is 25, they vacation together at times and spend a lot of time supporting each other’s dreams. You can often spot Marquis at Patrick’s non-profit “Pat on the Back Foundation” community events which target the youth. In addition to helping dad out with his many successful San Diego based businesses. He is the President and founder of Pat On the Back Foundation, a non-profit that opens up opportunities to youth throughout underserved communities of San Diego County. 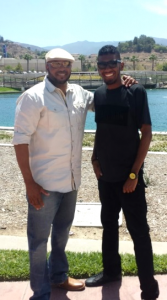 Along with being a great dad to Marquis and running Pat on the Back Foundation, he has been an entrepreneurial example 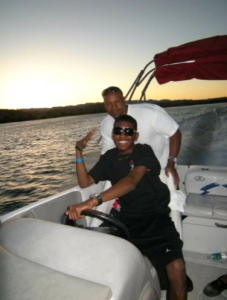