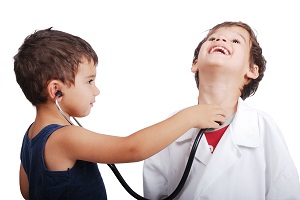 We’ve talked before in numerous blog entries about the importance of co-parenting after divorce. A new study has just discovered another good reason to keep things amicable with your ex: your child’s health.

We’ll talk about it more in this issue.

Researchers from Carnegie Mellon University have found that the children of divorced or separated parents who did not communicate with one another were 3 times as likely to develop a cold as adults.

Researcher Michael Murphy is quick to point out that divorce itself doesn’t seem to be the cause.

“More recent work has shown that (the susceptibility of negative physical and psychological health outcomes) is not about the divorce per se, but there seem to be factors related to divorce, such as how well parents can communicate regarding their child following a divorce that seems to be better predictors of outcomes.”

For the study, 201 adults were separated into 3 groups:

All groups were quarantined and intentionally exposed to a virus that causes a common cold. They were then monitored for 5 days as researchers looked for signs of a respiratory illness.

Results showed that adults whose parents lived apart and did not speak during their childhood were more than 3 times as likely to develop a cold than those whose parents were able to communicate.

How can lack of communication cause a cold?

It’s important to note that what the study found was an association and not a direct cause-and-effect link.

That being said, one line of thought for the association is that the psychological stress experienced by some children whose parents fail to communicate could have an adverse effect on the immune system.

Here at The Men’s Legal Center, we’re big fans of dads. The role you play in the life of your child is not limited to whether or not you’re married. Even though your marriage is ending, your responsibilities as a father have not. Let your children know how important they are to you. While they may not always tell you, deep inside, you mean a great deal to your child.

If you’re a father facing divorce, we urge you to get in touch with us here at The Men’s Legal Center in San Diego. Our sole purpose is to make sure men have the resources and knowledge they need for the best possible outcome in family court.